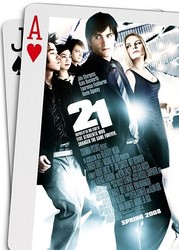 Synopsis: Based on Ben Mezrich's nonfiction bestseller "Bringing Down the House," about six M.I.T. students who were trained to become experts in card counting and subsequently took Vegas casinos for millions in winnings.

Laurence Fishburne is in final negotiations to board Columbia Pictures' Vegas-set thriller "21." Liza Lapira and Josh Gad also have joined the cast of the blackjack tale. Read more...

Based on Ben Mezrich's best-seller...

Director Robert Luketic In Talks For '21'

Based on the bestseller...

Based on M.I.T students winning big in Vegas...

Kevin Spacey Is 'Bringing Down The House'

Its "The Inside Story of Six M.I.T. Students Who Took Vegas for Millions"...