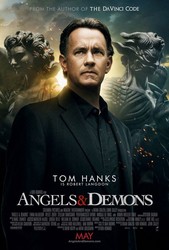 Synopsis: Story centers on religious art scholar Robert Langdon (Hanks), who once again finds himself entangled with powerful forces with ancient roots: the Illuminati -- the most powerful underground organization in history -- and the Catholic Church. Zurer will play Vittoria Vetra, an Italian scientist who joins forces with Langdon.

Ewan McGregor is in talks to square off against Tom Hanks in "Angels & Demons," Columbia's prequel to "The Da Vinci Code" being directed by Ron Howard and produced by Brian Grazer and John Calley. Read more...

Sony's "Angels & Demons" has become the first major casualty of the ongoing writers strike. Studio said Friday that it is postponing production on the Tom Hanks starrer, which is a prequel to last year's megahit "The Da Vinci Code." Sources said the script, which was penned by "Da Vinci" scribe Akiva Goldsman, was rushed to meet the WGA's Nov. Read more...

Tom Hanks is in final talks to star in a Da Vinci Code prequel. He is reported to be close to agreeing to return as Harvard professor Robert Langdon. Ron Howard is also in final negotiations to direct Angels and Demons, according to the Hollywood Reporter. Read more...