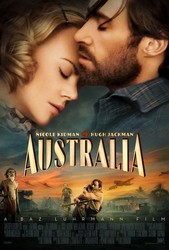 Synopsis: Set in northern Australia before World War II, an English aristocrat who inherits a sprawling ranch reluctantly pacts with a stock-man in order to protect her new property from a takeover plot. As the pair drive 2,000 head of cattle over unforgiving landscape, they experience the bombing of Darwin, Australia, by Japanese forces firsthand.

Nicole Kidman arrived under an umbrella with her husband, Keith Urban, holding hands like smitten teenagers. Hugh Jackman was walking around with a plate of broccolini, part of a dietary schedule that has him eating every three hours. Read more...

Romance being called an Oz 'Gone With the Wind'