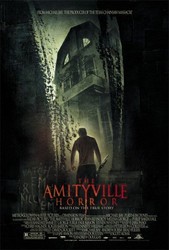 Synopsis: A family moves into a Long Island house that has a disturbing past. Soon after they move in, they too believe the stories of the house being haunted. Ooze comes out of the walls, doors mysteriously and violently swing open, and flies descend. After priests' attempts to exorcise the house do not stop the unexplained and horrible occurences; the family moves out, 28 days after they moved in.

Ryan Reynolds In Remake Of 'The Amityville Horror'

To be directed by Andrew Douglas...