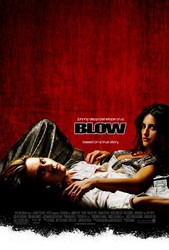 Synopsis: Based on the true story of how powder cocaine turned into America's biggest drug problem and how one man from the blue-collar suburbs became the $35 billion-dollar-a-year conduit to the Colombian cartels. George Jung (Johnny Depp) pursued what he thought was the American Dream. Rather than become just another construction worker like his father, George moves to California where he discovers the profitable pleasures of selling marijuana. A spell in prison introduces him to big-time Colombian dealers, and soon George is involved with their plan to export tons of cocaine to American shores. He becomes fabulously wealthy, but takes a dizzying fall that knocks him out of the underworld.