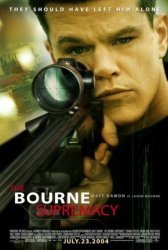 Synopsis: Jason Bourne, a man on a search to find out his real identity as he evades the CIA and assassins. This time, the story centers on a Chinese vice premier supposedly slain by Bourne.

"little dialogue and lots of action"

With an expanded role...

First Look At Matt Damon In 'The Bourne Supremacy'

Posing for photos in Berlin...

With Matt Damon aboard...