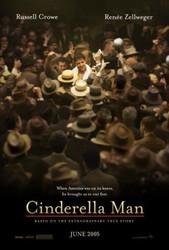 Synopsis: Tells the tale of real-life heavyweight boxing champ Jim Braddock (Crowe). During the 1930s, Braddock was an aging boxer who made a comeback while trying to provide for his family during the Depression.

Pushed back due to Crowe dislocating his shoulder...

Would be joining Russell Crowe...

And news on Crowes injury...

Bierko To Take On Russell Crowe In Ring

Ron Howard is to direct...