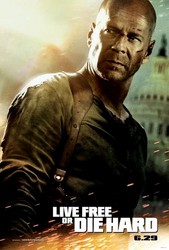 Synopsis: The story centers on an attack on the U.S.' computer infrastructure that begins to shut the country down. The mysterious figure behind the scheme has figured out every digital angle but never counts on an old-fashioned, "analog" McClane.

Hollywood tough nut Bruce Willis has confessed that he's finding it harder to do the stunts he was famed for in his youth. The 52-year-old said that one stunt in the forthcoming Die Hard 4.0 almost left him without an eye. Read more...

And what happens to John McClane...

'Die Hard 4' Gets A Re-Write By Doug Richardson

So could be coming sooner than expected...

Possibly as the daughter...