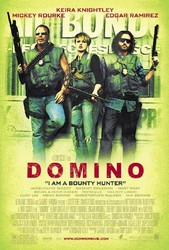 Synopsis: Based on the real-life story of Domino Harvey -- is described as a Los Angeles crime saga experienced through the eyes of Harvey, an ex-Ford model and daughter of actor Lawrence Harvey who gave up her pampered lifestyle to become a real-life bounty hunter.

Eight new additions to the cast...

Richard Kelly will pen the script...