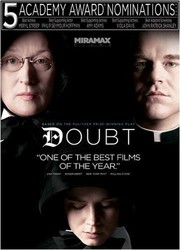 Synopsis: Set in 1964, Doubt centers on a nun who confronts a priest after suspecting him abusing a black student. He denies the charges, and much of the play's quick-fire dialogue tackles themes of religion, morality and authority.

Meryl Streep and Philip Seymour Hoffman are to star in a move version of the award-winning stage play Doubt. Streep will play the principal of a Catholic school who accuses a priest of being a paedophile. Read more...