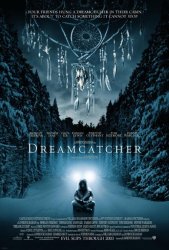 Synopsis: Four young friends perform a heroic act and are changed forever by the uncanny powers they gain in return. Years later, on a hunting trip in the Maine woods, they are overtaken by a blizzard, a vicious storm in which something much more ominous moves...Challenged to stop an deadly force, they confront an unparalleled horror, with the fate of the world in the balance.

Based on the Stephen King bestseller...