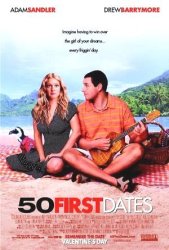 Synopsis: Henry Roth (Sandler) is a veterinarian living in Hawaii who enjoys the company of vacationing women. He leaves the playboy life behind after he falls for Lucy (Barrymore), who suffers from short-term memory loss. Since she can never remember meeting him, Henry has to romance Lucy every single day and hope that she falls for him.

21 stills straight from the studio...

Sandler Is To Star Next In 'Fifty First Kisses'

Drew Barrymore may also join him...

Sandler May Give 'Fifty First Kisses' To Barrymore