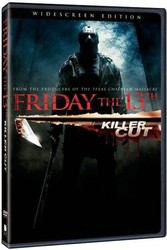 Synopsis: A group of young adults discover a boarded up Camp Crystal Lake, where they soon encounter Jason Voorhees and his deadly intentions.

Jared Padalecki In Talks For 'Friday The 13th'

Jared Padalecki is in final negotiations to star in the remake of "Friday the 13th" that Platinum Dunes is producing for New Line and Paramount. Marcus Nispel is directing from a script by Damian Shannon and Mark Swift. Read more...

Damian Shannon and Mark Swift have been tapped to write "Friday the 13th," the remake of the horror classic being produced by Platinum Dunes for New Line. Read more...