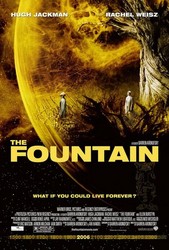 Synopsis: It's the journey of one man in the present as well as both 500 years in the past and into the future. Among the issues it tackles are love, death and immortality.

Hugh Jackman In 'The Fountain' Talks

He leaves for a part in Troy...

Pitt - Aronofskys 'The Fountain' Gets Greenlit