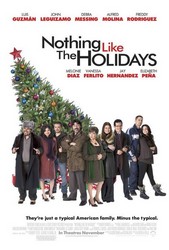 Synopsis: A Puerto Rican family living in the area of Humboldt Park in west Chicago face what may be their last Christmas together.

Debra Messing is rounding out the ensemble cast of the Latino family drama "Humboldt Park" for Overture Films. In Alfredo De Villa's film, Messing plays the wife of John Leguizamo's character and joins him on a trip back to his parent's home. Read more...

Freddy Rodriguez and John Leguizamo will star in Overture Films' family dramedy "Humboldt Park." Story revolves around the return of three siblings to their parents' home for the holidays in Humboldt Park on Chicago's northwest side. Read more...