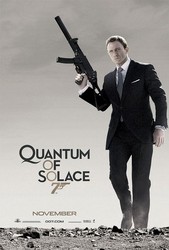 Synopsis: Seeking revenge for the death of his love, secret agent James Bond sets out to stop an environmentalist from taking control of a country's water supply.

Producer Mark Ronson says he and Amy Winehouse have abandoned recording the theme to the latest James Bond film. Ronson said the singer is "not ready to record any music." He produced much of Winehouse's Grammy-winning "Back to Black." He made the comments in an interview with Sky News on Friday. Read more...

A stuntman was seriously injured in a car crash while filming an action sequence for the new James Bond movie on a famously winding lakeside road in northern Italy, a local official said Thursday. Read more...

James Bond pic "Quantum of Solace" will open in Blighty on Oct. 31, a week ahead of its Nov. 7 U.S. bow. Other Euro territories getting their 007 fix ahead of the U.S. Read more...

The next James Bond film is to be called Quantum of Solace, producers have confirmed. The title is taken from one of a collection of short stories published by 007 creator Ian Fleming in 1960. Read more...

Ukrainian actress Olga Kurylenko has been cast as the female lead in the new 007 movie, which will start principal photography under the working title "Bond 22." Returning from "Casino Royale" are Judi Dench as M, Jeffrey Wright as Felix Leiter and Giancarlo Giannini as Mathis. Read more...

St Trinian's star Gemma Arterton has been cast as a Bond girl in the latest 007 film, according to industry paper The Hollywood Reporter. The 21-year-old actress will play a character called Fields in the movie, which has the working title of Bond 22. Read more...

Mathieu Amalric, who played a paralyzed stroke victim in "The Diving Bell and the Butterfly," will face off against Agent 007 in the 22nd installment in the James Bond franchise, from Columbia Pictures and MGM. Read more...

Director Marc Forster has confirmed some details of the 22nd James Bond film in an interview with Swiss newspaper SonntagsZeitung. Principal photography will commence on Thursday 3rd January 2008 - a day earlier than previously stated by Daniel Craig. Read more...

Daniel Craig, who made his debut as James Bond in Casino Royale, told reporters that he's eager to get started on the 22nd installment in the iconic spy franchise and excited by the prospect of collaborating with director Marc Forster. Read more...

According to casting notices sent out this morning, producers Barbara Broccoli and Michael G. Wilson are looking for a Latina actress in her late twenties, preferably with South American roots. Read more...

Ever since the "Bourne" movies have come on the scene, the makers of James Bond have been in the line of fire for having a dusty, lethargic spy on their hands -- "Casino Royale" notwithstanding. Read more...

'Bond 22' To Shoot In Pinewood Studios

In a boost for Pinewood Studios and the British film industry, Eon Prods. has confirmed that the next James Bond movie will return to its Pinewood home (Daily Variety, July 16). Read more...

No Czech Republic Return For 'Bond 22'

Citing the lack of financial incentives in the country, 007 production company Eon has informed Prague's Barrandov it will not be using the studios for "Bond 22," according to Barrandov head Vladimir Kuba. Read more...

Having toughened up the character of James Bond for Casino Royale to huge critical acclaim, Daniel Craig has surprisingly revealed that the next Bond outing will mark a return to the comedy that Roger Moore brought to the franchise in the Seventies. Read more...

Bond producers have chosen a 007 newbie as the latest steward of their action franchise. Marc Forster, best known for intimate dramas such as "Finding Neverland" and "Monster's Ball," will direct the 22nd James Bond film for Sony. Read more...

Put back from May...

Next chapter being worked on...