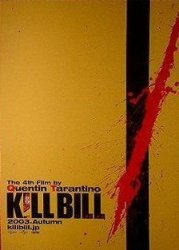 Synopsis: "The Bride" was once part of a group of world class female assassins, until the group leader, "Bill" and the other assassins turn against her. Five years later "The Bride" awakens from the coma the assassins left her in and heads out to seek bloody revenge. Unlike conventional movies, Kill Bill is told in chapter format making the narrative flow more like a book than a film

Its Official Kill Bill Has Been Split In Two

'Kill Bill' To Be Split Into Two Movies?

The fourth film by Tarantino...

"Punching and kicking and fighting"...

She Will Kill Bill...

Of Uma Thurman and Lucy Liu...