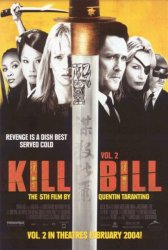 Synopsis: After dispensing with former colleagues O-Ren Ishii and Vernita Green in Kill Bill Vol. 1, the Bride resumes her quest for justice. With those two down, the Bride has two remaining foes on her 'Death List' to pursue  Budd (Madsen) and Elle Driver (Hannah)  before moving on to her ultimate goal -- to kill Bill (Carradine).

From the second movie...