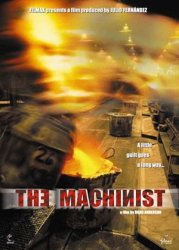 Synopsis: Trevor Reznik, a machinist, has lost the ability to sleep. But this is no ordinary insomnia. Trevor has not slept in a year. Fatigue has led to a shocking deterioration of his physical and mental health. Suspicious of his appearance, Trevors co-workers first shy away from him, then turn against him after hes involved in a shop accident that costs a man his arm. They blame Trevor for the accident. He has become a liability to himself and others, and now they want him out.

Christian Bale To Topline 'The Machinist'