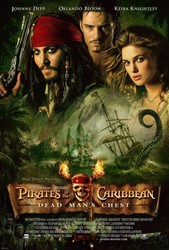 Synopsis: This time around, Johnny returns as Captain Jack Sparrow and is caught in yet another tangled web of supernatural intrigue. It turns out, Captain Jack owes a blood debt to the legendary Davey Jones, ruler of the ocean depths and captain of the ghostly Flying Dutchman. If Jack can't figure a crafty way out of this one, he'll be cursed to an afterlife of eternal servitude and damnation. And as if that weren't enough, Captain Jack's problems throw a huge wrench into the wedding plans of the blissful Will Turner and Elizabeth Swann, who quickly find themselves thrust into Jack's misadventures.

Sorry to see the Captain go...

To be set on island of Dominica...

Skarsgard Joins 'Pirates Of The Caribbean 2'

Casting Call For 'Pirates Of The Caribbean' Sequel

Word comes from a spy...

Could be very possible...

Disney To Make 'Pirates Of The Caribbean' Sequel

Johnny Depp said to be ready...