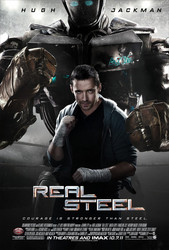 Synopsis: Takes place in a near future where human boxing has been outlawed, and heavy, humanoid robots slug it out in the ring instead. Into this world step a father and his estranged teenage son, who train an extraordinary fighter.

Karl Yune has joined the cast of DreamWorks Studios' "Real Steel," which Shawn Levy is currently lensing. Set in the near future and revolving around the sport of robot boxing, "Real Steel" toplines Hugh Jackman. Read more...

After casting a wide net for its search of a young actor to play Hugh Jackman's son in "Real Steel," DreamWorks and director Shawn Levy have tapped 11-year-old Canadian Dakota Goyo for the part. Read more...

Hugh Jackman is in talks to star in the Shawn Levy-directed "Real Steel" for DreamWorks. Project is a "Rocky"-esque tale of a fighter who has to reinvent himself when human boxers are replaced by robots. Read more...

Action director Peter Berg, who had been talking with DreamWorks about taking on the studio's futuristic robot boxing movie "Real Steel," has moved on, opening up the gig to Shawn Levy. Read more...