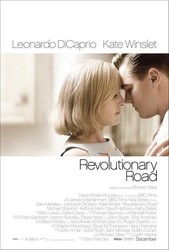 Synopsis: A young couple living in a Connecticut suburb during the mid-1950s struggle to come to terms with their personal problems while trying to raise their two children. Based on a novel by Richard Yates.

SAM MENDES' film work is a distinct, not an acquired taste. You either love it or loath it. Try being middle-of-the-road on "American Beauty" or "Road to Perdition," or even "Jarhead." It doesn't play. Read more...