Pitch Black 2: The Chronicles of Riddick 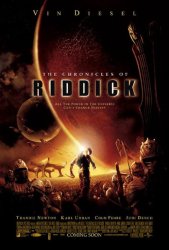 Synopsis: The movie continues the adventures of Riddick, a brooding convict who in the first feature was being transported as part of a space mission that was shipwrecked on a mysterious planet.

Saving for the DVD...

More From Vin Diesel On 'Chronicles Of Riddick'

Nervous at the premiere...

Tour Of 'Chronicles Of Riddick' Set With Vin Diesel

Although still in talks...

And a promotional artwork pic...