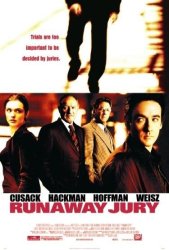 Synopsis: Set in New Orleans, this is the story of a mysterious man, Nick Easter (Cusack) who gets himself not only on the jury of a landmark case against a gun manufacturer, but as the foreman, in an attempt to influence the other jury members to vote a certain way. Meanwhile, Easter's girlfriend, Marlee (Weisz), tries to swindle the attorneys (Hackman, Hoffman) to pay millions of dollars to have the jury return a verdict friendly to their clients. The case involves the widow of a man killed in an office shooting suing the gun manufacturer of the weapon that was used, under the claim that they knew the store that sold it was not obeying the laws about firearm sales.

Jennifer Beals Gets In 'Runaway Jury'

Weisz Is To Star In 'Runaway Jury' And 'Envy'

She is to star in both toplining movies...