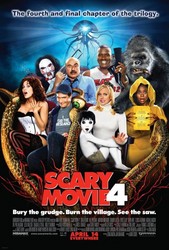 Synopsis: Anna Faris and Regina Hall are back as the loveable, dim-witted Cindy Campbell and her self-serving, sex-crazed pal, Brenda, respectively -- joined this time around by Craig Bierko ("Cinderella Man"), as the cute-but-utterly clueless Tom Ryan. Together, they battle to save the world from a ruthless alien invasion. And, in true Scary Movie tradition, the outrageous celebrity cameos are non-stop.

With Anna Faris and Regina Hall...

Even before thirds release...