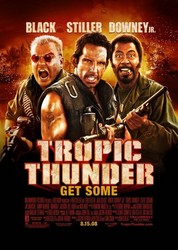 Synopsis: Through a series of freak occurrences, a group of actors shooting a big-budget war movie are forced to become the soldiers they are portraying.

Two days after being hospitalized for an attempted suicide, Owen Wilson has dropped out of the DreamWorks' ensemble comedy "Tropic Thunder." Both DreamWorks and Wilson's personal publicist declined comment. Read more...

Owen Wilson and Nick Nolte have enlisted in "Tropic Thunder," the Ben Stiller-directed DreamWorks comedy about a group of actors who go on location to shoot a war movie, only to find that reality replicates their plot. Read more...

Ben Stiller plans to star in and direct Tropic Thunder, a high concept comedy that hes been developing ever since he worked on Steven Spielbergs Empire of the Sun way back in 1987. Read more...