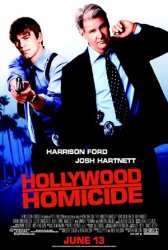 Synopsis: Combines the worlds of law enforcement and the music industry. It pairs a young cop and older cop, both of whom moonlight in other jobs -- acting and real estate -- who get themselves involved in a crime within the music business. Washington will play Sartain, a feared rap impresario who in the past has arranged the murder of several rappers who wanted out of their contract. He also is working in tandem with a former LAPD officer who is now the head of security for Sartain's music company.

A little banged up...

See Ford and Hartnett in action!