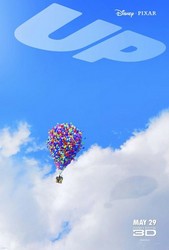 Synopsis: By tying thousands of balloon to his home, 78-year-old Carl Fredricksen sets out to fulfill his lifelong dream to see the wilds of South America. Right after lifting off, however, he learns he isn't alone on his journey, since Russell, a wilderness explorer 70 years his junior, has inadvertently become a stowaway on the trip.

Pixar is going a little older in 2009 than its typical demo. The Disney-owned toon studio's release that year will be "Up," about a 70-year-old man who teams with a wilderness ranger to fight beasts and villains. Read more...