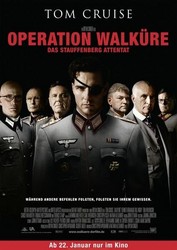 Synopsis: At the height of WW2, a group of high-ranking German officers hatched a plot to assassinate Adolf Hitler, and seize power of the military command in order to end the war. The operation was codenamed "Valkyrie", for the emergency plan that was meant to be used in case of a revolt against the Nazi government. This plan had been modified by the conspirators to ensure their success, but for various reasons the plot failed when finally carried out on 20 July 1944. The conspirators of the inner circle were shot after a kangaroo trial or sentenced to death soon after.

Eleven extras playing German soldiers were injured Sunday evening when they fell off a truck on the set of Tom Cruise starrer "Valkyrie" in the center of Berlin, police said Monday. Read more...