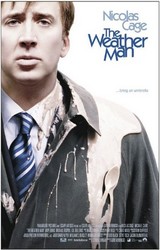 Synopsis: Popular Chicago weatherman, Dave Spritz, has a shot at the big time when a national morning television show calls him for an audition. Professionally, Dave is on the top of the world, but his personal life is in complete disarray. Dave's painful divorce, his dad's illness and trouble with his kids have him poised on the knife's edge between stability and disaster. The harder he tries to control events, the more he finds life, like the weather, is completely unpredictable.