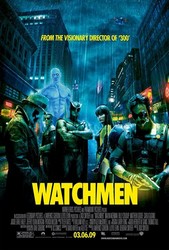 Synopsis: Set in an alternate America, "Watchmen" follows costumed hero Rorschach, who is living a vigilante lifestyle because most masked heroes have retired or been outlawed. While investigating a murder, Rorschach learns that a former masked-hero colleague has been killed, prompting him to begin investigating a possible conspiracy.

Zack Snyder, director of the upcoming Watchmen, talked about the film's music, visual effects and the lawsuit against distributor Warner Brothers by 20th Century Fox seeking to halt the movie at a preview screening in West Hollywood, Calif., on Oct. Read more...

Zack Snyder, who is directing a movie based on Alan Moore's Watchmen, told SCI FI Wire that he will shoot the film with some of the techniques developed in making 300, but will also make use of real sets for the story's alternate-universe New York City. Read more...

Based on the DC Comics limited series...

To be written by David Hayter...