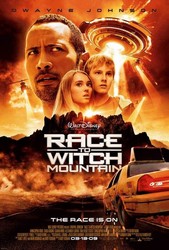 Synopsis: Based on a science fiction novel by Alexander Key and followed a pair of siblings, endowed with paranormal powers, who go on the run from a diabolical group of men who wish to exploit their abilities. The brother and sister turn out to be extraterrestrials.

Ciaran Hinds and Alexander Ludwig have joined the cast of "Race to Witch Mountain," Disney's reimagining of its 1975 adventure movie "Escape to Witch Mountain." The adaptation revolves around a pair of paranormal-powered siblings (Ludwig, Robb) who, with the help of a Las Vegas cab driver (Johnson), go on the run from a diabolical group of men who wish to exploit their abilities. Read more...

The Rock Set For 'Witch Mountain'

Dwayne The Rock Johnson will star in Witch Mountain for Walt Disney Pictures. Andy Fickman is directing, and the studio will begin production in March. Read more...