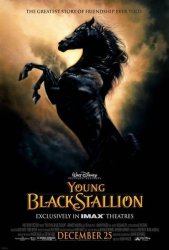 Synopsis: In Disney's first dramatic feature made specifically for the giant screen, Walt Disney Pictures is proud to present the continuation of a family favorite and a story that has enthralled generations of readers. "The Young Black Stallion," a prequel to the 1979 classic, presents the horse's adventures with a young girl named Neera, who has been separated from her father in Arabia by WWII. Left alone in the desert, she befriends the wild colt, whom she names Shetan. Once reunited with her father, however, Neera remains haunted by images of the "lost horse of the desert" -- one of a few stallions of legend, rumored to be "born of the sands, sired by the night sky, drinkers of the wind." The original writer and producer of "The Black Stallion" have returned for this production, which will bring giant screen audiences the wonder, excitement, and magic of Walter Farley's equine hero as they have never seen it before.