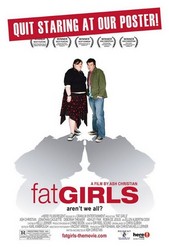 Synopsis: Armed with biting humor and quirky sensibility, Rodney and his Rubenesque friend Sabrina are valiantly suffering through the indignity known as high school. Both are outcasts; hes gay and shes overweight. Trapped in a small Texas town and having come to accept his "fat girl" within, Rodney is an aspiring Broadway star who musters up the energy to confront his fears and take life  and the hot new student from England  by the horns. With Rodneys awkward experiences, off-beat attitude and strange evangelical family, "Fat Girls" is a hilarious rollercoaster ride that careens to an outrageous climax. This auspicious debut announces the arrival of filmmaker and star Ash Christian as a major new talent.