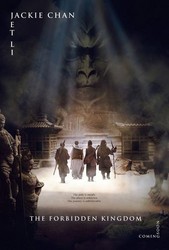 Synopsis: A discovery made by a kung fu obsessed American teen sends him on an adventure to China, where he joins up with a band of martial arts warriors in order to free the imprisoned Monkey King.

Jackie Chan, who co-stars for the first time with fellow martial-arts star Jet Li in The Forbidden Kingdom, told reporters that he had tried unsuccessfully to work with Li for the past two decades. Read more...

Collin Chou is joining Jackie Chan and Jet Li in "The Forbidden Kingdom." Lionsgate is the lead distributor on the co-release with the Weinstein Co. Principle photography has started, with Rob Minkoff directing from a John Fusco original screenplay based on the Chinese legend of the Monkey King. Read more...