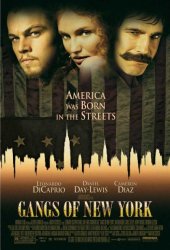 Synopsis: Set in the period from 1840-1863, this is the story of how gang members, outlaws, crooked cops and corrupt politicians flourished in New York City's underworld. The crime drama focuses on the powerful Manhattan Irish and Italian gangs, who subsequently became the Mafia in the time of Tammany Hall and Boss Tweed. The two gangs are the "Dead Rabbits" and the "Native Americans." Amsterdam Vallon is the son of Rabbits' murdered leader, and he vows vengence on the man who killed him, Bill "The Butcher" Poole.

And news on the running time...