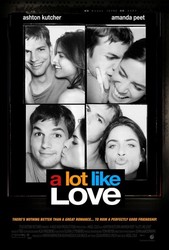 Synopsis: A romantic comedy about destiny, connection and the frequently fuzzy line between chance friendships and happily ever after. It traces the relationship of Oliver (Ashton Kutcher) and Emily (Amanda Peet) who meet on a flight from Los Angeles to New York seven years ago  each of them declaring that they couldn't be more wrong for each other. Life keeps bringing them back together over the next seven years, but the timing never seems right. As they struggle with their different partners, careers and breakups, they turn from casual acquaintances into trusted friends who can say anything to one another. As they each search for love and a relationship that's not fated for disaster, it takes seven years for Oliver and Emily to figure out that maybe what they really have is somethinga lot like love.


Amanda Peet In 'A Lot Like Love' With Aston Kitcher