New 'Lord Of The Rings' Trailer

Hi, I have a significant amount of addendum to add to this story. I was also at GAMA last week and saw all the LOTR goodies that Titan saw. I also have photos (undeveloped), and I spoke to a store owner who has been chosen for some special promotions for the movie. Free tickets, special showings, the works.

But this is not the big news! When the Decipher/Games Workshop presentation was over they announced that some special footage would be shown later that evening in one of the meeting rooms. Qualified buyers only, which means store owners and distributors only! The piece was about 8 to 10 minutes in length, and consisted of the following: (please note I could not make notes and the excitement of what I saw made remembering details difficult.)

PART 1:
The original internet trailer with the additions that were revealed recently. Nothing new here. 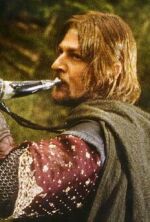 A different trailer, but one with a similar format to the original. This one had some of the same interviews but showed different scenes, such as, the hobbits are in the Prancing pony and they try and avoid being being knocked down by other patrons. This is done with someone on stilts or who is very tall. The other memorable new bit was the scene where Boromir gazes at the ring as seen in the internet trailer. However there's a twist! HE SPEAKS! "It is a great wonder that a thing so small could cause such great trouble." I believe this is said at the council of Elrond and not in the mountains as shown in the film. The rst of this trailer had some cool bits but the details are now hazy.

PART 3:
Yet another minute and a half trailer. This one opens the same as the previous one does with a bit about Tolkien and LOTR's effect on the world of fantasy, while showing shots of art, comics, games and other stuff like that. It then shows a brief interview with Sean Astin where he talks about all the elements that make LOTR so great. Then it shows quick scenes including the chase to the ford, from a variety of angles. Including one awesome shot, the camera is looking back as if from Arwen or Frodo's perspective. Right there about to get them is a Ringwraith, with his gloved hand stretched out to grab the Ringbearer! Very Cool! It's like the nazgul is going to reach out of the screen to grab you! Then each major character from the film is shown with a caption. i.e. "Elijah Wood as Frodo" This trailer as with the other two ends with the same credits. 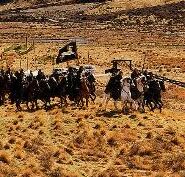 PART 4:
The next tape was about 5 minutes long give or take. It had a brief opening title, which consisted of The Lord of the Rings in a different font to the one seen before. Then the fun begins! The first scene is one of a courtyard in what must be Minas Tirith and several soldiers of Gondor moving swiftly to thier posts. The next scene is one of a grim looking Aragorn donning some chainmail armour. This is followed by a quick shot of Grima Wormtongue, who looks extremely pale and slimy. Next comes a series of scenes that show the Riders of Rohan. Including one shot that looks like when they come across the party of orcs that have Merry and Pippin. Next is a series of shots from Amon Sul (sp) and the breaking of the fellowship. Including a head shot of Lurz the Uruk-Hai about to fire his bow, very similar to the toy seen at Toy Fair. There are also shots of Aragorn and Legolas frantically searching for Frodo. The next series comes from Helm's Deep. Lot's of shots of men or Uruk-Hai (I can't tell, it's dark and raining) with pikes. Lot's of general battle scenes involving our heroes and the men of Rohan against Saruman's forces. Most notably was a quick shot of Gimli wielding his axe and a strange, almost goofy shot of Legolas running along a battlement, picking up a discarded shield. Placing it at the top of a staircase and surfing down the stairs on the shield firing his bow. Yes I said surfing! Just before this sequence was a brief shot of Theoden having armour put on. The helm's deep section closes with a shot of Eowyn wielding a big sword, cutting down several Orcs. This seems to take place in the caves at Helm's Deep. Next is more of the chase to the ford with Frodo and Arwen being chased by Nazgul. These scenes are again from a variety of camera angles and include a great shot of Arwen on one side of the river and all 9 nazgul on the other side, staring each other down. Also there is a shot of Arwen drawing a sword. The next sequence gives us a look at the magic duel between Gandalf and Saruman at Orthanc. Each is thrown back by the others magic until finally Gandalf is thrown against a wall and seemingly is imprisoned. he whole thing ends with a few shots of Merry and Pippin being thrown around by orcs and looking suitably terrified.

This is as much as I can remember reasonably clearly. There is other stuff but it's too hazy to describe clearly. There are shots of Hobbiton, Gandalf showing Narsil in it's scabbard, a quick shot from inside what I think could be Moria. Unfortunately a clear memory is not something I possess when excited. Even after watching it twice.

Whoa! I forgot the biggest coolest part! I saw Treebeard!!!!! Only his face as Merry and Pippin approached. Imagine a large gnarled oak, that suddenly opens it's eyes and looks up at you! VERY COOL!