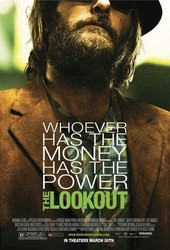 Synopsis: About a former high school hockey star, disabled in a car accident, who outwits a group of criminals who plan to rob the small-town bank where he works as a janitor.