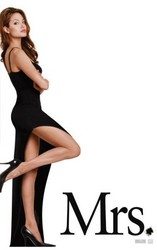 Synopsis: A sexy, action-packed thrill ride about a bored married couple who discover that they are enemy assassins. John and Jane Smith are an ordinary suburban couple with an ordinary, lifeless suburban marriage. But each of them has a secret -- they are actually both legendary assassins working for competing organizations. When the truth comes out, John and Jane end up in each other's cross-hairs.

Said to be a vehicle for A-list movie stars...