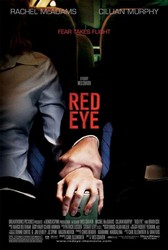 Synopsis: Lisa Reisert (Rachel McAdams) hates to fly, but the terror that awaits her on the night flight to Miami has nothing to do with a fear of flying. Upon boarding the plane, Lisa is pleasantly surprised to find that she is seated next to Jackson (Cillian Murphy), the seemingly charming man with whom she had shared a drinkand perhaps even a brief flirtationin the airport terminal. But moments after takeoff, Jackson drops his façade and menacingly reveals the real reason he's on board: He is an operative in a plot to kill the Deputy Secretary of Homeland Security...and Lisa is the key to its success. If she refuses to cooperate, her own father will be killed by an assassin awaiting a call from Jackson. Trapped within the confines of a jet at 30,000 feet, Lisa has nowhere to run and no way to summon help without endangering her father, her fellow passengers and her own life. As the miles tick by, Lisa knows she is running out of time as she desperately looks for a way to thwart her ruthless captor and stop a terrible murder.

Based on an aircraft hijacking...

Based on a flight hijack...