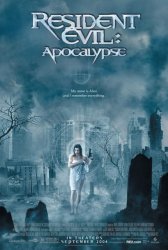 Synopsis: Begins where the first film left off, with Alice (Jovovich) in the heart of the ravaged and deadly Raccoon City. She has been subjected to biogenetic experimentation by the vast Umbrella Corporation and become genetically altered, with super-human strengths, senses and dexterity. These skills, and more, will be needed if anyone is to remain alive.

And the future of the francise...

Behind the set with Milla...

'Resident Evil 2' Gets Cast Fehr And Guillory Aboard

'Resident Evil 2' Goes Forth With Sequel

And the Nemesis is going to be in it...