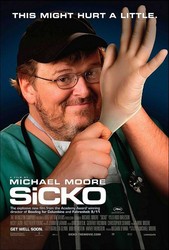 Synopsis: A comedy about 45 million people with no health care in the richest country on earth.

Michael Moore may have few qualms about visiting Cuba, but Iran has proved a step too far. Helmer has turned down an invitation to visit the Iran Intl. Read more...

YouTube has removed clips of Michael Moore's U.S. health-care expose "Sicko" that appeared on the site during the weekend, two weeks before the film's June 29 opening. Read more...

Finally unveiling his new documentary "Sicko" on Saturday, Michael Moore met with the international press, where he challenged the premise behind the U.S. Read more...

His critique of health-maintenance organizations...