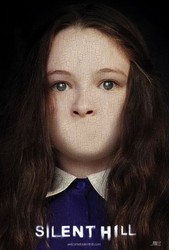 Synopsis: Rose cannot accept the knowledge that her daughter Sharon is dying of a fatal disease. Over the protests of her husband, she flees with her child, intending to take the girl to a faith healer. On the way, she ends up driving through a portal in reality, which takes her to the eerie and deserted town of Silent Hill. Sharon disappears in Silent Hill, and Rose follows what she thinks is her daughter's silhouette all over town. It's soon clear the town is not like any place she's ever been. It's inhabited by a variety of creatures and a living darkness that descends and literally transforms everything it touches. The human inhabitants - the ones who are left - are trapped and fighting a losing battle against the Darkness. Joined by a cop named Cybil, who has been sent to bring her and Sharon back, Rose searches for her little girl while learning the history of Silent Hill and that Sharon is just a pawn in a larger game. To save her daughter, Rose makes a deal with a demon in the form of a little girl.....

Based on popular video game adaptation...