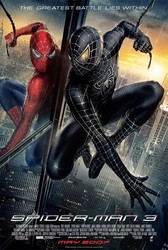 Synopsis: Harry Osborn's insanity drives him the edge and transforms him into the Green Goblin. In an effort to destroy Peter Parker he hires Flint Marko to aid him in his quest. Meanwhile Peter must balance his relationship with Mary Jane and the arrival of a new love interest, Gwen Stacy. The final showdown then pits former best friends against each other as a new villain looms on the horizon.

Revealing some of the characters...

Worried about the cutting room...

Topher Grace As Villian In 'SpiderMan 3'

As one of the two villians...

J.K. Simmons Signed Up For 'SpiderMan 3'