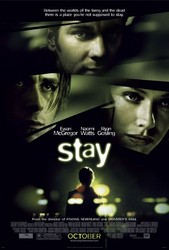 Synopsis: In this reality-bending thriller, a distraught young man announces to his psychiatrist that he plans to commit suicide in three days. The psychiatrist's desperate attempt to help his new patient leads him through the city on an incredible, nightmarish journey.


Ryan Gosling To 'Stay' With McGregor And Watts