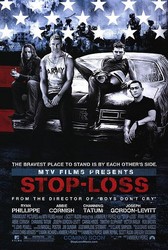 Synopsis: Follows a soldier (Phillippe) who returns home to Texas and is called to duty again in Iraq through the military's "stop-loss" procedure. The soldier then refuses to return to battle.

Ryan Phillippe To Star In 'Stop-Loss'