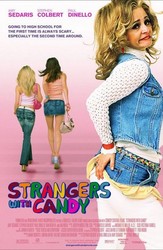 Synopsis: A prequel to the Comedy Central series of the same name, and is the story of Jerri Blank (Amy Sedaris), a 46 year-old ex-junkie, ex-con who returns to high school in a bid to start her life over, only to confront the most dangerous gang of all  the cool kids.


Warner Take On 'Strangers With Candy'

First time he has produced a movie...

In the feature film based on the Comedy Central series...