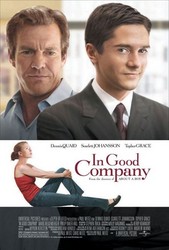 Synopsis: A magazine advertising exec (Quaid) who finds himself working for a young, fresh-out-of-business-school boss (Grace) following a corporate merger. The two wind up forming a friendship that is upset when the young boss has an affair with the daughter (Johansson) of Quaid's character.

Comedy by the Weitz bros...

Scarlett Johansson In Talks For 'Synergy'