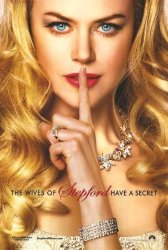 Synopsis: Revolves around a group of husbands who transform their feisty wives into robots that cater to their every whim. The concept will be contemporized by more than having the wives carting kids around in minivans and SUVs instead of station wagons. While the original adaptation of the Ira Levin novel was a straight thriller, the revamp is considered to be more of a sophisticated black comedy.

Would spoil the movie...

Trailer From 'The Stepford Wives' Online